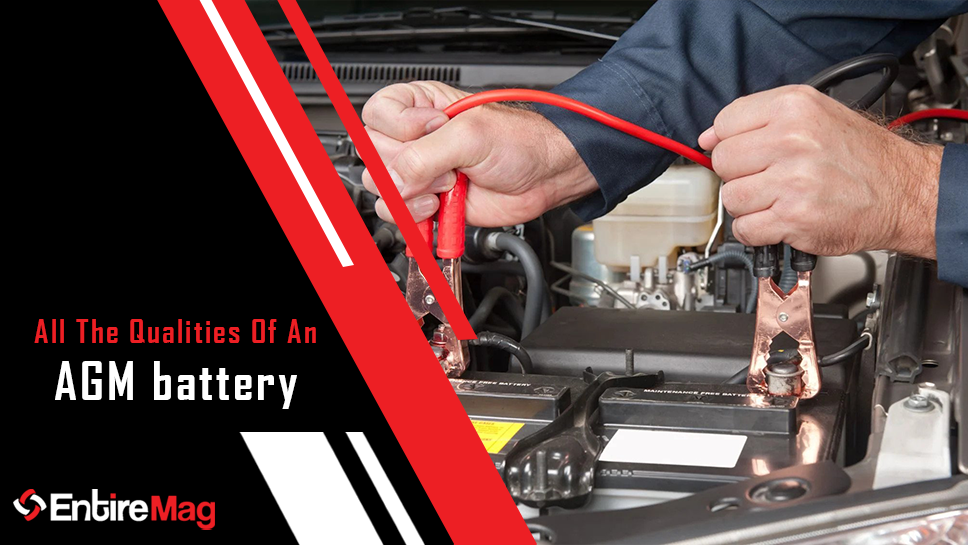 In common lead-acid batteries, the positive and negative plates are suspended inside a casing, completely covered with a solution of acid and distilled water. They have no sealed batteries, and they can be opened to allow, during maintenance, to top up with distilled water to maintain the electrolyte level sufficiently high and adequate for the proper functioning of the battery.

In AGM batteries, between the negative and positive plates, there is a fibreglass felt in which the electrolyte is retained. This is why AGM batteries, even if damaged externally, do not have any liquid leakage.

This is possible not only due to a solid component holding the electrolyte but also because these batteries are sealed. They are, in fact, also referred to as watertight batteries.

This means that in their maintenance, they cannot be opened to top up with distilled water, as with traditional batteries.

This might seem like a handicap, but in reality, it is not at all: being also sealed, the leaks are nil, so the need for top-ups is automatically eliminated.

They are generally safer in an accident: they should guarantee the retention of liquids inside them, which certainly does not happen with traditional batteries.

The advantages offered by AGM batteries are so many and varied and concern both safety and maintenance, as we have already seen, but also performance.

In particular, Renogy AGM RV batteries are built using a lead with a much higher purity index than most AGM and common acid/lead batteries. The lead used is certified and 99.99% pure. It is also for this reason that the batteries produced by Renogy last longer and have greater power.

The numerous advantages of Renogy AGM batteries are low internal resistance and a greater surface area of the lead plates. This way, greater power is provided at the start-up time, a fast recharge capacity and a very low self-discharge, completely airtight to avoid cracks and damage, and resistance to vibrations.

An AGM battery can certainly involve a higher initial purchase cost than a traditional one. But it will certainly prove, over time, a well-made investment:

The basic chemistry is always that of traditional batteries, in which we have a lead electrode that interacts with an electrolyte (sulfuric acid). But in the case of AGM batteries, how the electrolyte is presented fundamentally changes.

The acronym AGM stands for Absorbed Glass Mat, which indicates their peculiarity: the electrolyte of this type of battery is not free but is held by a spongy glass fibre material, and it is placed in a sealed compartment. For this reason, AGM batteries are also referred to as watertight.

The first advantage that derives from the fact of being watertight is that these batteries, being sealed, do not require maintenance.

They are also much safer than traditional ones: since there is no free liquid, and it is closed. They do not present the risk of accidental acid leaks and, most importantly, do not produce harmful fumes. This feature is highly appreciated, for example, in the case of installation on boats or campers, where they can easily be placed near the rooms intended for the living room of people or in rooms without ventilation because they do not represent a potential danger to humans like traditional ones.

Technically, the fact that the lead plates are in direct contact with a solid impregnated with acid means that the reaction between electrode and electrolyte is very fast and effective. This type of battery is, in fact, suitable as a battery for starting engines that require a big starting point.

But that’s not all: they manage to hold their charge for a very long time with minimal dispersion. And this makes them perfect batteries also for a different use from the previous one, such as the operation of services in vehicles such as boats or campers, where these batteries do not have to provide great power but must guarantee the operation of the instrumentation and accessories of the vehicle. For extended periods.

Another great advantage is that the discharge rate during periods of inactivity of these batteries is very low. If properly stored, they will lose charge in a lesser quantity than traditional batteries, with which there is a systematic risk of finding them. Completely discharged.

AGM batteries withstand repeated charging cycles and have a rather long average life. In addition, the timing for recharging is very fast, thus allowing use with stable performance.

If we want to find a defect in these batteries, their price is certainly higher than that of other batteries. But obviously, this defect is balanced by decidedly important qualities, such as high performance and a decidedly higher active lifespan.

But what is the difference between Gel and AGM batteries?

Let’s understand how they work and clarify which type can be better in your specific case.

It is a lead accumulator in which the electrolyte has the consistency of a gelatinous compound, and the container is sealed with special pressure valves. The internal chemical reaction uses the VRLA technology, which allows for the recombination of gases. This completely avoids the leakage of liquids and guarantees its functionality without any maintenance. Furthermore, the gel protects the plates during the discharge phase, making them suitable for deep discharge cycles and allowing the battery to be installed even near people and electronic components.

The acronym AGM stands for Absorbed Glass Mat: in these batteries, the lead acid is liquid and absorbed in porous mass separators in glass fibre, which also strengthens the plate. The way to act is very similar to Gel batteries and are therefore also “Maintenance Free”, i.e. without the need for maintenance, sealed to avoid accidental spills of the liquid, and can be used in environments with poor ventilation and installed anywhere.

Differences between Gel and AGM batteries

In this way, the two products look very similar, so where is the difference?

Technically, only in the different forms and management of the electrolyte, but what interests us to know is that AGM batteries have greater compactness between the elements, which allows them to have a longer cyclic life, and that they have better performance with rapid discharges (for example during start-up).

On the other hand, Gel batteries work a little better than AGMs at higher temperatures and are recommended in case of slow discharge and when small solar panels are installed. In reality, there is no single answer, as each situation should be evaluated individually.

It must be considered that a camper tends to use a slow discharge mode since even if the consumption inside the vehicle is constant, it rarely requires large quantities of Amperes in a few seconds. In addition, many campers are now equipped with solar powered generator systems.

The thing about WiFi in Japan is that it’s always on. Whether you’re at a coffee shop, an airport, or your friend’s house, you...
Read more
Business

Staging your rentals is an important step in finding potential tenants.If you don’t prioritize staging, tenants won’t be attracted to your property during showings,...
Read more