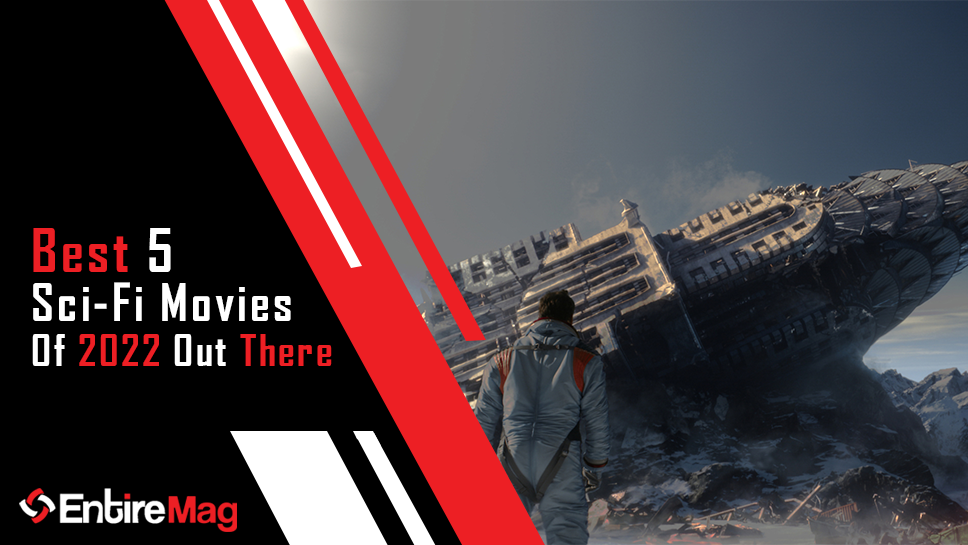 Living in the Age of Science, the cinema of today is ruled by Science Fiction. The far-flung adventures on different galaxies and meddling with space have always kept us intrigued. The mysteries of extraterrestrial life in the Sci-fi movies keep us wandering for hours and this year has been up to the mark to give us quite content to digest. After going through the amazing movies released in 2022, here are the best five Sci-Fi movies that you must watch. But, do keep in mind that to stream to your fullest content you need a reliable and high-speed internet connection that keeps you hooked and is present for all your online needs, and what better option than to rely on one of the best with Xfinity, here for all your internet and even cable TV needs of your household. Now, with great internet speeds, you can stream as much as you want or get amazing quality channels on your even. So, get on and watch these amazing Sci-Fi movies but remember why a reliable provider is a must. Read Up!

All of us see the amazing moon at night but what if, this natural satellite of Earth becomes our doom. Well, that’s what is happening in this Moonfall, directed by Roland Emmerich. The German director is always raising the bar with his amazing disaster movies, earning him the name “Master of Disasters”. The movie opens, as a conspiracy theorist claims that the moon is about to hit Earth. The rumor spreads like fire, and soon the moon is on the verge of colliding with Earth. A mysterious force is found to be disrupting the natural orbit of the moon, and hurling it towards Earth. A NASA executive together with the conspiracy theorist sets on a space mission to save our planet and find out about his mysterious force. Are there some Aliens behind this catastrophe? Or is it something else, this disaster movie keeps you intrigued with its amazing visuals and destruction.

Dual is a movie that is sure to engage your emotions and anticipation, as it revolves around the story of a clone. It sets in a time, whereby technological advancements can create everybody’s clone. This identical self of yours will be available to replace you, once you die to save your loved ones from grief. The gorgeous Karen Gillan stars as Sarah, a girl who decides to be replaced by her clone but soon doubts her decision.

Sara finds herself in an existential crisis. She had taken this decision after being diagnosed with a rare fatal disease with almost no chance of recovery. However, she makes a recovery but according to the regulations no two identical individuals can exist, so now she must fight her clone to death.

What if you could see a robot’s perspective of human life and the world? Well, this movie probes through the concepts of family, love, and connection via a robot’s life. The film is set in a nearby future, where a small family’s robot, Yang, is malfunctioning. Yang’s owner takes it for repair but learns that he and his family will have to face its untimely absence. Afterward, the owners learn some undiscovered aspects about themselves as they view their robot’s memory banks.

This movie takes you on an action-packed ride across different universes facing impending doom. The movie follows the life of Quan Wang, a Chinese-American laundromat who unconsciously gets connected with parallel versions of herself. She learns from her husband’s parallel self, that the people in another universe have developed a technology “verse jumping” that allows people to take control of their parallel versions. She also comes across the different lifestyles of each identical version of herself. She must utilize her newly gained powers to fight a powerful being that is trying to destroy the multiverse.

An Anime movie that takes you into the life of an introvert girl Suzu. She is an outcast who lives in the countryside. Not able to get along well with her fellows, she finds herself much more suited for the virtual world. Suzu logs into the virtual software known as U. Her avatar named “Belle” quickly grasps stardom with her singing. Seen as silent and incompetent in the real world, she becomes a star in the virtual one.

Suzu’s simple lifestyle and Belle’s famous lifestyle are in constant conflict with each other.  The movie has several references to the famous Disney movie, “Beauty and the Beast”. The movie takes a turn when a hideous creature, known as, Dragon disrupts her concert. Belle goes on a quest to find the true identity of this monster and the reason for his monstrous deeds.

Grab a pack of popcorn and enjoy these amazing Sci-fi movies with your friends & family. These 5 films will take you on an exciting ride, into the world of Science Fiction. Don’t miss out on the action and watch them now.

Checkout: What Space Movie Came out in 1992?

SolarMovie is a famous website for watching movies and TV shows in high-quality videos.It has a wide range of films, including comedies, dramas, and...
Read more
Movies

If you're looking for a new and exciting way to watch your favorite TV shows, you should check out IFVOD TV. This streaming service...
Read more
Movies

Do you have any information about what space movie was made in 1992? It's a blaxploitation-themed short film called Gayniggers from Outer Space. It's...
Read more