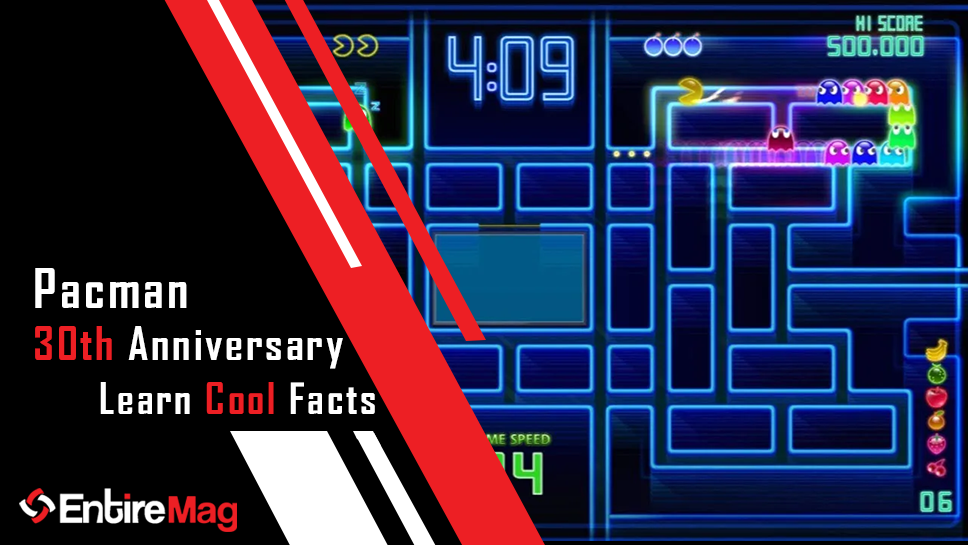 When it comes to video games, Pac-Man is an excellent example of the lasting impression they can have on a generation of gamers. The Pacman 30th Anniversary Google Doodle was created in 2010 as a tribute to the iconic game, commemorating the game’s success since its initial release in 1980.

It’s impressive for a game about a yellow ball eating and running away from ghosts. Toru Iwatani, a young video game designer, created the pop culture icon.

When he first started working on the title, “arcades were filled with violent video games that had you killing aliens,” he says. Toru Iwatani was already in the industry, working for Namco at the time. He went on to describe arcades as dingy places where only boys wanted to hang out. As a result, he set out to combat that stereotype by developing a game that both women and couples could enjoy.

In terms of our main character’s design, Iwatani claims that staring at a Pizza inspired the iconic shape we have. Because the pizza was missing two slices, Iwatani decided to create “Pakkuman,” a character that is an onomatopoeic reference to the Japanese term “paku-paku taberu”. The term is typically used to describe the sound produced by your mouth. When it is opened widely and quickly closed.

It’s a brilliant way to create a character, and that type of inspiration is still relevant today, on the Pacman 30th anniversary.

Pac-Man is actually running away from four ghosts. Rather than fighting off some menacing alien invaders or terrifying creatures from deep below. While this may not appear to be an intimidating foe. The gameplay instills a genuine fear of being caught off guard and losing a life to one of these guys.

Pacman’s wide mouth is his signature move. With this as Pac-only Man’s weapon, players must strategically chew their way to victory. And Iwatani designed the game so that Pac-Man could chomp on pills, fruits, and power pellets.

How Does the Game Work?

Like most games in the 1980s, Pac-Man was designed for arcades, so it was played on PC with a joystick or keyboard arrows. The game’s objective is to move Pacman’s character around the screen to consume the 240 dots. To accomplish this goal, players must make inputs to change the direction of Pacman, who is constantly moving.

Blinky (red), Pinky (pink), Inky (light blue), and Clyde are the four ghosts (each with their own name) (Orange). While you may be familiar with ghosts as AI that simply chases you. You may be surprised to learn that each of these four has its own attack strategy.

Each ghost will always be in one of three states: chase, scatter, or terrified. Yes, you read that correctly, terrified. But in the heat of the moment, that information will feel like bait because you can never tell what strategy a ghost is employing.

Nonetheless, according to some Pac-man fans, each ghost has some characteristics. So check them out as you get ready to celebrate Pacman’s 30th anniversary.

Blinky (red): Shadow also prefers to trail Pac-Man but changes his strategy to cruising at Pac-speed Man’s and even faster once you’ve eaten a lot of dots.

Pinky (pink): She moves in the same direction as Pac-Man but does not directly follow him; instead, she will maneuver around the nearest walls to catch you off guard and eliminate him.

Inky (light blue): As a wildcard, Inky may be the most dangerous of all the ghosts. His strategy is a hybrid of every other ghost’s, making him extremely dangerous.

Clyde (orange): Clyde earned the nickname “pokey” due to his strategy of leaving the box and heading to Pac-Man, but quickly changing directions for a “scatter” phase. He is especially dangerous in the maze’s lower left corner.

Pacman’s impact is being recognized with a Pacman 30th Anniversary celebration, which is a testament to the arcade game’s beauty.

Pac-Man can be credited with inspiring the use of Power-Ups in video games. And how they encourage players to think strategically.

We can also attribute the popularity of cutscenes to the iconic game because they did not exist prior to this game.

Most importantly, Pac-Man taught game designers the true value of the main character and how to create a gaming staple.

How to Play Pacman 30th Anniversary in Google Browser

The addition of the full Pacman game on the Pacman 30th Anniversary has to be one of the more interesting Easter eggs to have come out of the Google Doodle feature.

Today, all you need to do is open your Google Chrome browser and type “Pacman” into the search bar to see the Google Doodle. After that, simply click Play to be taken to a beginner level that was never present in the original game. This level allows Google to showcase its efforts in creating the doodle.

The steps are nearly identical on mobile. Open Chrome on your phone and type “Pacman” into the search bar, and you will be presented with the “PAC-MAN Doodle” right at the top of your search results. This is the same doodle from Pacman 30th Anniversary, so press Play to start playing the first level.

Use your arrow keys to control the character on the desktop version, and swipe gestures on mobile.